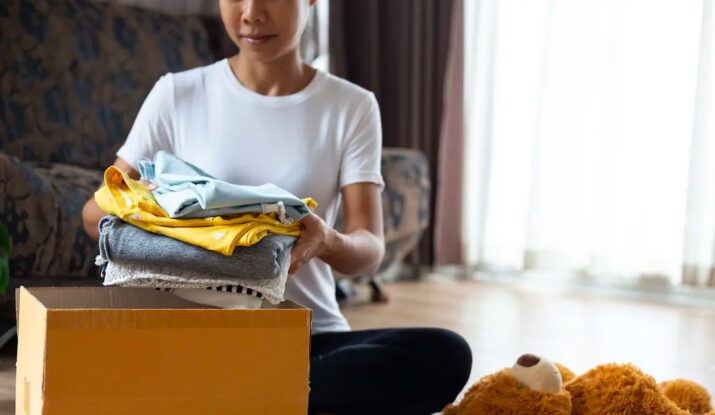 Take a look in your wardrobe right now. How many of those clothes have you not worn for a while? I am willing to wager that it is quite a few. You see; research suggests that around 30% of the clothes sitting in somebody’s home have not been worn for around a year. This is quite a startling figure, to be honest. In fact; the figure becomes even more startling when you add up the total value of all of the clothes sitting in wardrobes unused for a year.

In Canada alone, it is estimated that there is $30 billion worth of clothing…unused. Most of this ends up being sent to landfills eventually. In fact; 1.14 million tons of clothing is sent to landfills each and every year. As you most likely know, this is causing huge problems for the environment. In fact, those words should be enough to convince you that you should be recycling used clothes. I do urge you to read on though. It will show you other ways in which the recycling of clothes can benefit the environment.

“I do urge you to read on though. It will show you other ways in which the recycling of clothes can benefit the environment.”

Did you know that every ton of textiles that are tossed into a landfill increases carbon dioxide emissions by 3.6 tonnes? That is 3.6 tonnes worth of ozone layer damaging gas being produced. In short; not recycling clothes actually damages the environment. It contributes towards global warming. Sure; there are other things out there which contribute more to global warming than a lack of recycling clothes does. Every little helps though, right?

Did you know that we are fast running out of landfill space in the United Kingdom? There are only a few places in the country where placing landfills is viable. When these spaces are filled up there is nowhere we can really turn (at the moment at least). The lack of landfill space is likely to cause huge problems in the future with regards to pollution.

A single piece of clothing takes hundreds of years to start breaking down. They are quite bulky too which means that the lack of recycling clothes is pushing landfills to the breaking point. Remember; when clothes start to break down they will begin to release chemicals and the like into the environment. This causes a number of problems and landfills have been known to contribute to the pollution of water and the death of animals. Again there are other things that are contributing to the landfill problem in this country. You do however have to realize that even the smallest things such as clothes recycling can have a huge impact on the environment in the future. Remember; if just a fraction of people started to recycle their clothing we would be ensuring that the landfills can keep operating for as long as possible and that the environment suffers the least amount of damage.

There Are People Out There Who Need Clothing

Clothes recycling has the ability to save somebody’s life. If you throw that clothing away then there will be less clothing out there available to those who have a genuine need for it. Recycled clothing will not just be for those on the other side of the globe either. Recycled clothing is often used to ensure that the people who live on the streets are kept warm.

There are some people out there who will hand off their clothing to local cash for clothes centre. This is obviously fine. It is still going to be helping people. For example; if the unwanted items went to cash for clothes shop then this clothing will be sold at a reduced price to those who may not necessarily be able to afford ‘new’ clothing all of the time (remember, the clothing that you are recycling may be old to you but to somebody else it is new. It is a whole new outfit for them!)

In short; clothes recycling should really make you feel good knowing that you are making a difference in this world!

As I have demonstrated throughout this page; it is absolutely vital that you start thinking about recycling your used clothing. Why? Because if you do not recycle clothing then you are doing your part towards destroying the world that we live in. Sure; the world is not that badly damaged at the moment, but it is getting there. Clothes recycling may not seem like a big thing in your mind, but it is almost certainly going to have an impact on the lives of your descendants. Consider recycling clothing today and you will be doing your part towards making the world a far better place to live in.

Why not look into ways in which you can recycle your clothing today? I am sure that there are plenty of stores in your local area looking to take that clothing off your hands and pay you per kilogram and hopefully get it into the hands of those who can really benefit from it. If you live in London and have any unwanted clothes in wearable condition then bring your items to our recycling centre and get paid!

No products in the cart.